15 Miles, From Lexington to Dorchester

Jamie Zimmerman, Manager of the Cambridge Needle Exchange, gives a tour of the facility and talks about the importance of this needle exchange program with MassAve, MA‘s Jamie Bologna.

According to Zimmerman, more than 70 percent of their clients 1,500 annual clients are white, almost 20 percent are Latino, and about 7 percent are African American. More than a third of those serviced by the exchange are homeless. She says that the exchange distributes about 150,000 needles each year, with a roughly 85 percent needle return rate, and the center conducts about 200 HIV/HCV/STI tests annually.

58 years later, the measure of a man still holds.

The bridge that spans the Charles River and separates the Cambridge campus of MIT from the city of Boston is officially called the Harvard Bridge. We locals tend to call it the Mass. Ave. Bridge or the MIT Bridge. One bridge, three names, we’re a complicated people.

They based their new unit of measure on the height of the then 18-year -old Oliver Smoot, Lamda Chi Alpha’s shortest pledge that year. He measured in at 5 feet 7 inches, and they used his body as a yardstick to measure the bridge, marking it in paint along the way. The bridge came to 364.4 “Smoots” plus or minus one ear.

“We waited until 10-ish to do this, so that there’d be a lot less traffic,” explained Ollie Smoot in a phone interview. “I remember at the beginning being happy that it was not raining or really cold because I know I had on a pair of gloves, but I don’t think I had on a heavy coat. I can tell you, after about 50 Smoots, the only thing I was really thinking about was how tired I was.”

Smoot, who is retired and living in San Diego, said he and the other pledges laid his body out on the bridge over and over, marking every 10 Smoots with a painted line and a number, until they reached the other end.

To get up between each measure mark, Smoot started doing push ups, and then “for a while my pledge brothers picked me up,” he said. “Even at 18, getting up and lying down a lot of times — you get pretty tired.”

The pledge master in 1958 was Tom O’Connor, and according to Smoot, the new pledges would line up at the end of the dining room table at the fraternity house at 447 Beacon Street every Wednesday night to discuss the lessons they’d learned from the week before. And the master would give them new tasks for the week ahead.

It was O’Connor, says Smoot, who declared that the task for the first week of October would be to measure the bridge. “Everybody walked to and from MIT at least once a day and that’s the reason Tom wanted us to measure it,” said Smoot.

But why not just measure Ollie Smoot, and then make some sort of stick or measuring tape the exact length of Smoot, and use that to measure the rest of the way, instead of making him get up and down and up and down roughly 364 times?

Ollie Smoot and his unique unit of measure have received their fair share of media fame over the years. Public radio’s Robert Krulwich took a look at the Smoot in 2011. The Associated Press marked the 50th anniversary of the Smoot in 2008. Even People magazine did a featureon saving the Smoot in 1989, when the Harvard Bridge was slated for repair and the days were numbered for the markers on the cement.And in 2005, when Smoot retired (more on this in a minute), NPR’s “All Things Considered” interviewed him, as did the Washington Post. All the coverage seemed to mention the measure of the bridge as 364.4 Smoot, plus one ear.But the plaque on the bridge says plus or minus an ear. What gives?

“That’s the primary reason that I realized that, in my mind anyway, you should never rely on people’s memories for things, because for a long time I thought we had painted ‘364.4, plus or minus an ear,’” said Smoot.

“But then there’s a picture that I think it shows pretty plainly we just put down ‘plus one ear.’ We were somewhat aware that there was some inaccuracy but not nearly as aware as we should have been, so we probably should have painted ‘approximately 360.’” 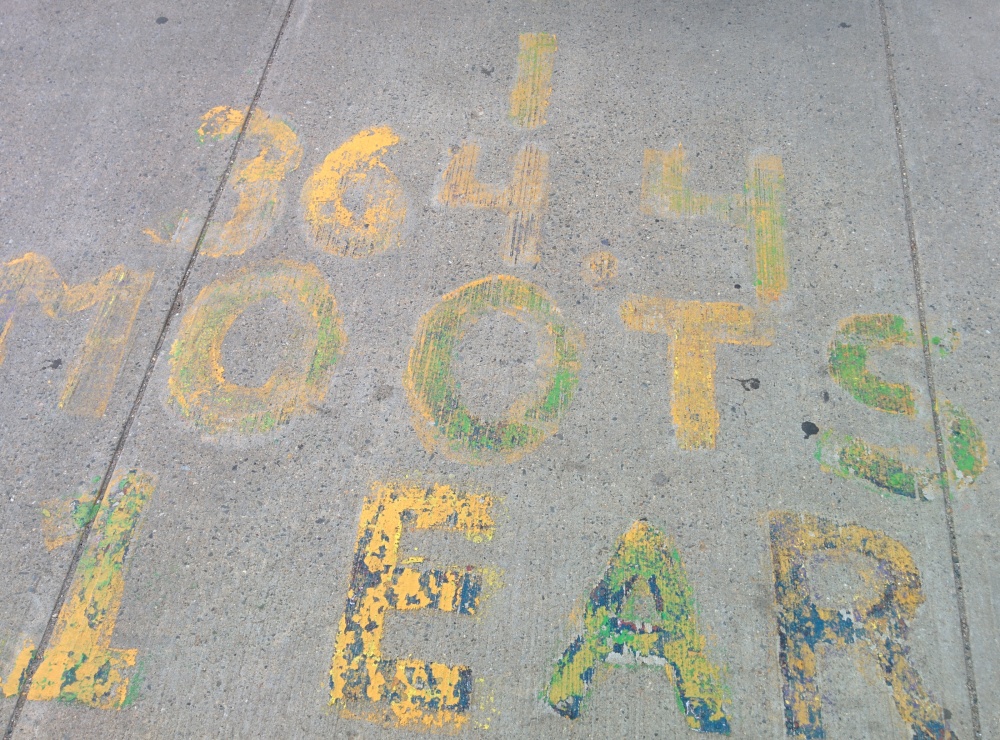 Ollie Smoot graduated from MIT in 1962, and went on to law school at Georgetown. He got married in 1964, started a family, and didn’t really think about the MIT stunt until 15 or 20 year later, when a reporter fromHoliday magazine called him to ask about it.

“I said to him, ‘Oh, you mean this was still there?’” recalled Smoot.

He went on to work for the DC trade group Information Technology Industry Council for more than two decades. In the early 2000s, Smoot was the chairman of the American National Standards Institute (ANSI), a group which advocates for standard units of measure and guidelines, until his retirement in 2005.

I know what you’re thinking, because I thought it too—But he insists the measurement of the Harvard Bridge at age 18 had nothing to do with his later career in standards.

“It was a matter of jokes every once in a while at a board meeting, but it certainly had nothing to do with my getting involved with ANSI,” he says. “It just was just something anecdotal.” Okay.

Recently, I visited the halfway mark on the Harvard Bridge, which reads “Halfway to hell” and includes an arrow pointing toward MIT, to talk with joggers, walkers, and MIT students about the Smoot.

Webb, a current MIT electrical engineering student, told me today it’s something all MIT students are told about on campus tours, and is part of the lore of the school.

“If you go on Google maps, you can actually use a Smoot as a unit of measurement,” he said. “It’s kind of funny, a nice little easter egg.”

Another walker, Arthur, who described himself as a lifelong resident of Cambridge and remembers a time before the Smoot, knew the basics of it. Did he know how long a Smoot is? “Oh I have no idea about that, I’m a former English teacher, I don’t do units to that level of detail.”

Maybe that’s the greater lesson of the Smoot — our units of measure are just arbitrary things someone made up a long time ago. And they can change.

For example, according to NPR, the kilogram is based upon some old official metal cylinder in Paris, which has been changing over the years. A kilogram of yesteryear was just a little bit heavier than it is today.

So the Smoot, it’s based on a guy, a living being that can grow and shrink over the years too. Is Smoot still, well, a Smoot?

58 years later a Smoot is still a Smoot. Each year new pledges return to the bridge to repaint the markings, continuing to mark the measure of Ollie Smoot, class of 1962. And the numbers and lines endure as a reminder of the arbitrary nature of measures, and of the lasting impact of the silly things we do in college.

“Do you ever have these feelings that something that is not truly reflective of your life’s accomplishments seems to be the biggest thing about you that other people know?” asked Smoot. “But I’ve gotten past that. Besides, how many real people get interviewed by People magazine?”

(I’ve created another measure for the Harvard Bridge — this one a measure of time, not distance. It takes one Bologna to cross the bridge on a bike, or 1 minute and 33 seconds, plus or minus a squeaky bike brake.)